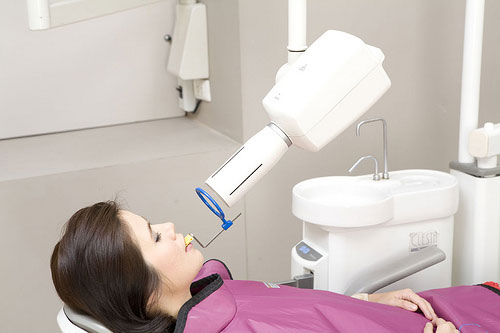 So this week we’ve had a number of patients asking about dental radiation.  A recent study published by Cancer, an American Cancer Society peer-reviewed journal, found that people with meningiomas (typically, benign brain tumors) are more likely to report that they’ve had certain dental X-ray examinations in their lifetimes.  This was all over the radio and news for the last few weeks, and we have had our fair share of questions about it.

The American Dental Association issued a release about this article.  You can view it here if you’d like to.  But I’ll give you a summary.  Basically, the study was done with about 1500 patients who developed an intracranial menangioma.  They were all diagnosed between the ages of 20 and 79 with the average age being 57.   “Participants were asked to report the number of times they had received bitewing, full-mouth, or panoramic films” during four stages in life: before age 10, between ages 10 and 19, between ages 20 and 49 and up to age 50.”  Now let me think about the last time I had my teeth cleaned (before I became a dentist)….hmmmm…I can’t tell you if one, I even had x-rays; and two, how many x-rays were taken.  Now I know I have had x-rays on a regular basis.  And if I needed to give an accurate answer, I would say regularly since I’ve been going to the dentist.  That’s about as close as I can get to giving a good answer.  Now I do agree, that radiation can have an effect on a body.  We see it all the time.  Dry mouth, more prone to decay, and there is a relation to cancer and radiation.  This is from patients who have had a history of radiation treatment for cancer before, also patients who are taking multiple medications.

Now dental x-rays are very important.  It is very difficult for dentists to diagnose decay in between teeth without the use of an x-ray.  Usually, when we can diagnose them, they are pretty significant in size.  So dental x-rays are very important for us to catch little cavities and take care of them before they become more of a problem.  Usually, we take x-rays on patients every 1-2 years.  It honestly depends on a number of different factors: if decay is present, any history of decay, lots of inflammation around your gums (gingivitis), and your age.  The LOW amount of radiation given from a dental x-ray is worth it to me and most people because cavities are much easier (on your pocketbook and time) when they are smaller.

If you have any questions, you can always email me directly at michelsondds@gmail.com.